Recursive Function is a year old now, and it's exciting to think about how far it's come in the last year. I think now is as good a time as any to provide an overview of the business, and reveal a little bit about what's working and what's not.

Developing custom web-based applications for clients has accounted for about 90% of revenue and most of my time so far. I've been very blessed in that this side of the business is healthy and growing. Even though I didn't put together any hard projections a year ago, I think it's fair to say that where I am right now has exceeded my expectations. I was pessimistic about my ability to find and acquire new clients, especially since the company is new and started as just one guy working out of his home office. It's not that I thought it'd be impossible, but I assumed that I'd still be struggling to find good clients and that more of my income would come from other sources, such as subscriptions from my web applications.

I've done work for a little over a dozen clients so far, and one of the surprising things is that only a few of them are businesses that I had any kind of relationship with before I started. I've worked on web development in the area for about 10 years, so I have a number of former clients and contacts at other firms that I expected I would be getting the majority of business from. However, most work has come from people I've met within the last year and a couple bigger clients are ones who weren't even a degree or two of separation away from pre-existing contacts.

I've not only been blessed with finding new clients, but with finding clients that I enjoy working for. My biggest clients so far have been startups, and they're working on some pretty interesting ideas with technology that I work with every day. I couldn't ask for more.

Generally speaking, I see that businesses are struggling right now to find good independent developers. And there are a lot of web-based startups stuck in the idea stage because they can't find any skilled, cost-effective developers to help them get running. As businesses' web development needs continue to grow and new startups are formed, I only expect this will provide more opportunities for the business in the future.

I don't mean to make it sound like everything has been rosy, or that it will be forever. It took about 4-6 months for me to hit my stride and find steady custom development work. And there's no guarantee that we're not at the edge of another bubble burst. But I'm happy with how things have grown so far, and am excited for things to come.

I launched Formstack a year ago to some decent buzz, but it took a while to see any significant revenue. It grew slowly but steadily for the first 8 months, yet the last few months have seen a sharp jump in new subscriptions. I can go into this in more detail in another post, but I feel like that recent growth is the result of a site redesign, small marketing tweaks, and the introduction of a number of key features.

While revenues are slightly below what I hope for, the growth hasn't been very far off from my expectations. I had always suspected that growth would be slow in the beginning and would take some time before taking off. I've written before about the myth of the overnight success story — it's easy to look at a few popular web sites who seemingly sprouted up overnight, and think that's the norm. Yet it's all but a lucky few that find success that way. The rest of us need to keep working at it one customer at a time while constantly building and tweaking. 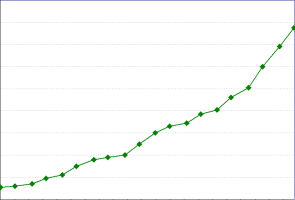 Continued growth won't be easy though. There's certainly a lot of competition as new form builder solutions are sprouting up and older ones improve their offerings. I'm also at somewhat of a disadvantage since I don't spend most of my time on this side of the business.

However, all things signal that there's a lot of potential and the site is still very much in the early stages of it's growth. I'm encouraged by the fact that I frequently get notes from customers who are thrilled to sign up, many who love how much it's simplified their work. I also have a lot of great ideas for growing the site, and certainly haven't lost any enthusiasm for continuing to work on it.

This site has generated the most buzz of anything I've built, and made a handful of blogger's "top Web 2.0" lists. However, subscription revenue barely covers the cost of running the site. I'm not surprised by this — I don't think that a monthly subscription model is right for this service. The greatest evidence of this is that I'm pretty sure that I wouldn't pay for a subscription, and I'm in the site's target demographic. Furthermore, I've purposefully made it easy for people to use the site without paying or even signing up for an account.

I had higher hopes for the site from a financial standpoint, but I never built it because I thought it'd be a big revenue generator. I built it because I was desperately longing to use the service — everything else I'd tried beforehand had terrible success rates or was incredibly difficult to use. I saw that I could create the basic service for minimal effort, and it had a number of technical challenges that would be fun to tackle. So because of that I don't see it as a failure. After all, I get a free subscription :)

I haven't put a lot of development into it over the last few months, but continue to support it and plan to run it for a long time to come. But to be honest I'm not sure what's in store for the site over the next year. There are a number of key features that I'd really like to introduce, and some other business models I want to experiment with, but all that's contingent on my available time.

This first year has been a very exciting one, and I haven't for one second regretted starting Recursive Function. It's certainly had it's share of challenges though, but I love what I'm doing and plan to do it for a long time.

As I've mentioned, I feel like I'm emerging from a bootstrapping mode where I built a business from scratch out of minimal resources. I'm entering a new phase where the business has a growing reputation and customer base, with resources at a point that I at least don't have to worry as much about where the next paycheck is coming from.

I'm confident that this next year will be even more exciting. I'm working on some interesting projects with clients, and have some new ones coming soon. I also have a lot of ideas that are clawing to get implemented, and I can't wait until they get out.

This all leads me to the question of how to manage the growth. I'll talk more about that in a couple days....

[Updated references to Formstack to prevent confusion about the name change]

Get notified when I publish something new: